Blake Wright, who heads Regency Labels, grew up in his father’s sheetfed offset operation, in Oklahoma City, Oklahoma, working summers and generally learning the ropes. Then, in the mid-1980s, a small nearby label operation found itself in some tax difficulties, and Wright persuaded his father to let him offer a bid on the business. The prior owner wanted out quickly, and before he hardly had time to reflect on his offer, Wright found himself running Regency Labels.

Wright’s entry into the label business was less than auspicious. When he took possession of Regency Labels, the business was already closed, but the presses still had ink in the fountains. The rewinder was an old sewing machine that had been modified. And when Wright elected to move the business, he was able to put the entire operation on a flatbed truck and one trailer, making just one trip to his new location.

Because Wright’s previous experience was in offset, he took classes at Clemson University and studied on his own to grasp the subtle differences in flexo printing. In the late 1980s, he bought a used Comco narrow web press and began to land some significant orders. A large order from a major hobby retailer in the 1990s led to his purchasing a new seven color Roto Press, and in 1999 Wright bought the business from his father.

Through the years, Blake has recruited several hearing-impaired operators, who have proven to extremely hardworking and dedicated. As a result, Regency Labels enjoys a reputation in Oklahoma City for providing meaningful employment to handicapped workers. Today Regency Labels remains family owned, with Wright’s wife Tamara doing estimating, and their sons T.J. and Westin learning the business on the pressroom floor. The company is headed toward $3 million in annual sales, and 16 employees ship labels across the United States and to Canada and Mexico. The core of the Regency Labels business is supplying the nutraceutical industry, and the company boasts it is equally comfortable printing on foil, vinyl, polyester, synthetic paper, clear polystyrene, board stock, and fluorescent material. Holograms, thermal transfer, and direct thermal transfer are offered routinely. Sales are made only to the trade, and Regency Labels products are often resold by screen and offset printers.

Blake Wright learned early on that he needed a plan against which to execute so that he could monitor his progress in the business. His most recent effort in that regard was a five-year plan that involved modernizing Regency Labels. The first step in the plan involved bringing prepress inside the business, and today the company has designers on staff who can not only prepare files for printing, but execute complete designs for customers if that is what they require. The second step consisted of installing a new print business management system. Wright chose Label Traxx, made by Tailored Solutions of Milwaukee, Wisconsin, to replace his previous system, a program developed for offset and converted to flexo, but no longer being adequately supported. Step three in the Regency Labels five-year plan involved becoming an integrated supplier, expanding the product line into new areas well beyond pressure sensitive items. Step four, according to Wright, involves bolstering the company’s marketing efforts—an area that he admits may still need some work. And the final step of Wright’s plan involves expanding his ability to print shrink sleeves and unsupported films. To accomplish this, Regency Labels recently completed installation of the first 17-inch Omet X-Flex 430 press in the Western Hemisphere. Wright says: “Our last five-year plan went so well it’s probably time to develop another.”

Regency Labels bought their Label Traxx print business management system in 2007. Says Wright: “Although our business was doing well and growing, we lacked workflow discipline, and needed a rigorous approach to estimating. I found that that I was personally doing all the estimates and that the prices we quoted were too often a function of how busy we were when we made the estimate. As a result, margins varied considerably. We also needed to better document our business, and to schedule work logically, not intuitively.”

Although he characterizes himself as “not a computer guy,” Wright installed the Regency Labels computer system himself. “We bought the entire Label Traxx package—estimating, job costing, accounting, quality control, and everything else—and have learned to rely completely on what has proven to be a very stable and well-conceived system made just for narrow web label printers and converters. Our previous software often let us down, and the vendor was more interested in offset than flexo, so we were never able to take full advantage of it.” Talking about how Label Traxx supports his business, Wright added: “Because not many of us at Regency Labels really understand how computers work, we thought we might have problems switching to a new system, but Label Traxx is very intuitive and has obviously been developed by people who understand how the label business works. When something arises that we don’t understand about Label Traxx, we have no problem reaching someone who can quickly take us through what is required. We had three employees at a recent Label Traxx user group meeting in Milwaukee, and learned several tricks that will help us be still more efficient in our daily operations. Most important, Label Traxx has given us the internal structure we need to take Regency Labels to the next level.” 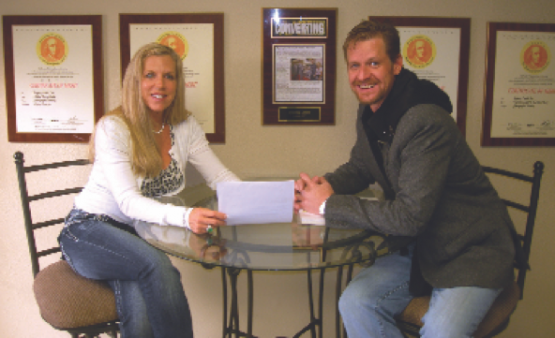 “Although our business was doing well and growing, we invested in Label Traxx because we lacked workflow discipline, and needed a rigorous approach to estimating.”